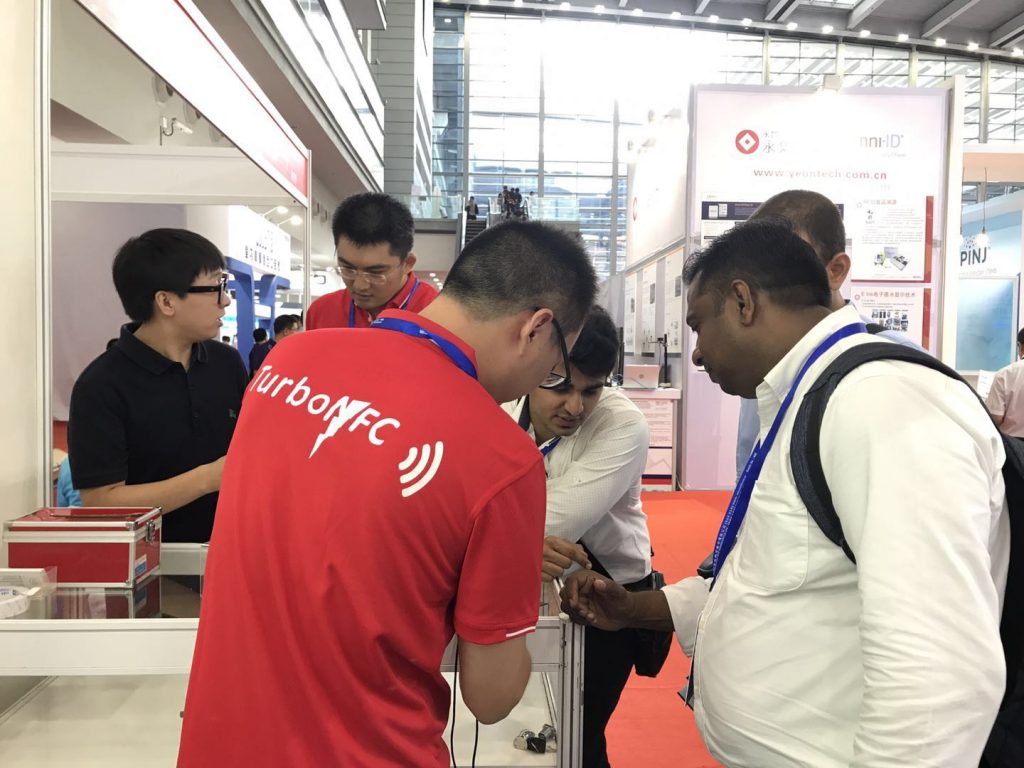 Nanjing Qiwei Zhixin Microelectronics Co., Ltd. with prototype products debuted in the largest and most professional Internet of Things exhibition IOTE 2017 summer exhibition, the exhibition during the display of the exclusive technology design of smart locks, smart card prototype scored by domestic and foreign participants affirmed and praised.

The high-power NFC wireless power-taking module of Kaiwei Zhixin has been developed and, on this basis, has successfully developed a passive smart card sample card with large eInk display and fingerprint recognition, as well as a battery-free, mobile phone lock/unlock smart lock prototype.

Prototype Smart Lock: Using the latest TurboNFC technology from Kaiwei Zhixin, the mobile phone is used to control the lock/unlock through the NFC interface.TurboNFC technology allows devices to receive high-power power wirelessly from mobile POS machines via the NFC interface and is sufficient to drive a micromotor.As a result, this smart lock only relies on the wireless signal of the phone’s NFC reader to work without the need for a battery.The lock also uses the original dynamic power distribution technology of Kaiwei Zhixin, which automatically controls the operating state of the motor according to how much power it receives wirelessly.Depending on the phone used, the lock/unlock process is usually completed within 1s-3s and the user does not experience significant delays.Thanks to TurboNFC’s powerful power acquisition capabilities, the smart lock can also include indicators, displays, and sound cues (still no battery required) to improve the user experience.

Prototype smart card: Using the latest TurboNFC technology from Kaiwei Zhixin, the built-in NFC interface communicates with devices with NFC reader interfaces such as mobile phones or POS machines, without the need for batteries.The card has an eink screen to display various information for users to review.The eink screen has high contrast and no glare problems, and the information displayed is maintained.The card also features a high-performance security core for a wide range of general and security operations (e.g. AES, etc.), as well as control of various peripherals.The included touch button sits to support user input.Since TurboNFC technology allows devices to receive high power from wireless devices such as mobile POS via the NFC interface, the smart card can only operate with out-of-charge battery-The smart card can also be added to a variety of biosensors such as fingerprint sensors (still do not require a battery) to further enhance security.