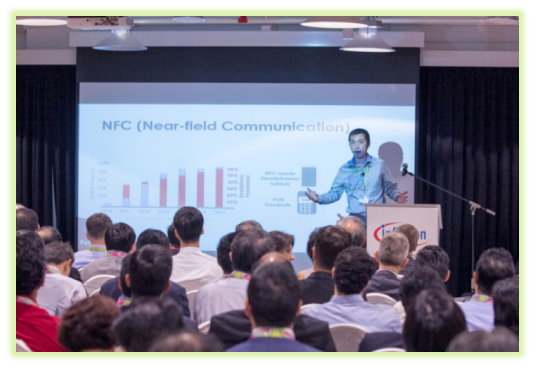 It is reported that The high-power NFC wireless power-taking module of Qiwei Zhixin has been developed, and on this basis has successfully developed a passive smart card sample card with large eInk display and fingerprint recognition, as well as a battery-free, mobile phone lock/unlock smart lock prototype.These products and prototypes are currently being offered to customers for trial evaluation.Many Android users are no strangers to NFC.NFC was originally targeted at the mobile payment market, but with the popularity of mobile devices, the future in industrial production, environmental monitoring, intelligent transportation, smart home, smart medical, health monitoring and other fields will also be a wide range of applications of NFC technology NFC will also become an important part of The Internet of Things technology.The rich application scenario also puts forward more requirements for the function and performance of NFC.Dr. Zhou Rugu told 36, most of the NFC products on the market now only use its close-up communication function, but in fact, NFC also has a unique close-range wireless energy transmission capabilities, similar to wireless charging technology.With the development of NFC products to be more intelligent and secure, the market demand for close-range wireless energy transmission is very impressive.To give a simple example, future payment cards will also integrate function modules such as display, keystrokes, Bluetooth, biometric sensors, and the power required by these modules can be obtained wirelessly from the NFC reader.But there is not yet a high-power edgy NFC wireless power-access product that can meet these functions, which greatly limits the development of the NFC market.

Qiwei Zhixin for the above pain point, after more than two years of research and development, the introduction of the industry’s leading high-power NFC wireless power-taking products.Zhou said that the current common NFC products from mobile phones or NFC POS wireless energy is generally about 10 milliwatts.The high-power NFC wireless power-taking product of Qiwei Zhixin can increase the energy obtained to 60-100 milliwatts, which clears the way for the realization of biometric sacperization, liquid crystal display and other functions without batteries.

Zhou said that in order to increase wireless energy reception power, the research and development team has redesigned the underlying system structure from NFC, in addition to the radio frequency, antenna, low power, zero power configuration and other technologies, also need to configure the corresponding researchers to collaborate on development.Traditional NFC chip giants NXP, Infineon and ST are more concerned about NFC’s communications and wireless payment security chips.But Zhou also said that they are not satisfied with 60-100 milliwatts of power, the research and development team is constantly optimizing the design of low-power systems, hoping to continue to increase wireless energy transmission power.At the same time, Qiwei Zhixin has also applied for more than 10 U.S. patents for high-power NFC wireless power-picking technology.

It is reported that The high-power NFC wireless power-taking module of Qiwei Zhixin has been developed, and on this basis has successfully developed a passive smart card sample card with large eInk display and fingerprint recognition, as well as a battery-free, mobile phone lock/unlock smart lock prototype.These products and prototypes are currently being offered to customers for trial evaluation.In the next six months to a year, Kaiwei Zhixin’s high-power NFC radio transmission chip will be mass-produced, and the cost of the chip will be basically on a horizontal line with the traditional NFC chip.

In addition to high-power NFC wireless power-picking products, Qiwei Zhixin has also developed two other products.One is the NFC and wireless charging function sin-in-one solution, the other is the NFC signal amplifier.The high-power NFC wireless power-taking scheme mentioned above is for NFC devices that do not have batteries themselves and are completely dependent on external energy.NFC and wireless charging are two-in-one solutions for NFC devices with batteries themselves, but high performance and power consumption.These devices have a strong demand for wireless charging capabilities, but the implementation of wireless charging features requires the establishment of separate antennas and chips, the larger cost is high, so it can not be widely used on NFC devices.Zhou said they could use the same chip and the same antenna, while supporting NFC and wireless charging to save volume while reducing costs.The product is now under development and is expected to be available by the end of next year.The third product of Kaiwei Zhixin is the NFC signal amplifier, which is aimed primarily at small-size devices.In the traditional scheme, the antenna area is very small due to the product size limitation, which limits the communication performance of NFC.The use of NFC signal amplifiers can increase communication performance.Zhou said that compared to the existing independent NFC amplifier chip products on the market, Qiwei Zhixin’s competitive advantage is mainly derived from its own unique NFC technology.These technologies can significantly reduce the size of the chip, reducing the cost to about half of the same kind.The product is expected to be mass produced early next year.